Thank you very much for your interest in our activities. 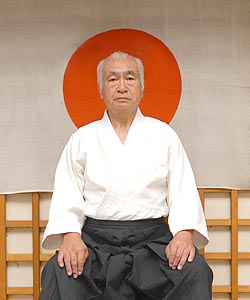 In 1949, Hiroshi Isoyama Shihan (grand master) was initiated into the founder of Aikido, Morihei Ueshiba O-Sensei, and has keeping practice for a long time. Nowadays he has '8-dan' (the 8th grade of the Aikido master) and gives lessons to a lot of people not only the inside of Japan but all over the world.
Toride Aikikai
Toride Aikikai is one of the Dojo (training group) of Aikido in Fujishiro town of Toride city, Ibaraki Japan. In 1973, our grand master Hiroshi Isoyama Shihan started lessons for few students of primary school in Fujishiro town. Toride Aikikai has developed for many years, and has a lot of chances to study under him.
Toride Aikikai is composed of three groups as below;
We are practicing and aiming at 'Jissen Aikido' which is helpful not only in the inside of the Dojo but also in everyday life. We held the 35th anniversary demonstration in 2008 and keep practicing still in Toride city. 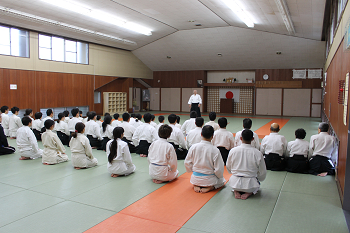 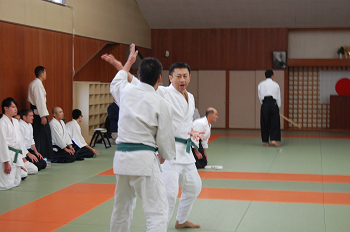 About Aikido
Aikido originated in Iwama town of Ibaraki Japan and developed from old Japanese martial arts as a method for training body and mind. Iwama town is called the 'birthplace of aikido' and located in a near place from our Fujishiro town, it takes about 50 minutes by the train. 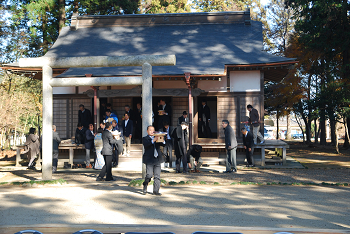 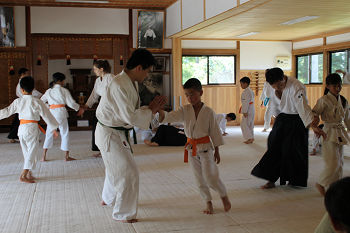 Aiki Shrine and the Ibaraki Branch Dojo in Iwama town.
(Special lesson for the teenage group of Toride Aikikai in Iwama)

For more information about Aikido, please visit to web sites of Aikikai Foundation or their Ibaraki Branch Dojo .